Had chance to meet up with Roberto at the Seasprite warehouse to check out the new toys and look at the new RRD freestyle waves – New 100 ltr contest – New RRD religion – New RRD kite wave boards and the new -carbon autoclave 10 knot light wind twin tip. 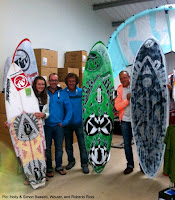 Roberto also showed us the new SUPER Sup and talked through the new design concepts of all the gear. I will be testing out some of the new freestyle waves 2012 editions – Neal will be getting the new 2012 religions and James on the beach will have the new Obsession Pro on test later next week.

The RRD team dropped down to the beach last Friday to show off the new gear before heading off to the National Windsurf Festival at Hayling Island.
Neal, John Skye, Rosco, Chris, Jem, and Roberto all came to WWWC to before the wind arrived to bring some new RRD toys down to the test centre. 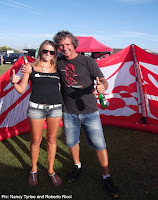